I finally had a bit of a creative breakthrough.  It isn’t waaaaaaaaaaaay off of my regular scrapping path, but I did include some fussy cutting.  For the record, I hate fussy cutting.  Yes, I know you move the paper, not the scissors.  Still, I get impatient after the first couple of cuts.  Then I get reckless.  Next thing you know, all of those smooth curves get hacked to pieces.

Two things finally got me going.  First, a beautiful cloud paper from Shimelle Laine’s Starshine collection just begged to be fussy cut.  I love the paper, but couldn’t figure out how to use it as a layer in a layout.  So out came the scissors.  I cut quite a few of the cloud groupings without knowing what I was going to do.

The second catalyst turned out to be exhaustion.  The day that I had cut out the clouds, I tried to place them on the layout.  Nothing looked right, and I finally gave up.  So, on a night that I could barely keep my eyes open, I began to work on it again.  The clouds just magically fell into place.  Lack of sleep seems to allow me to not overthink things and just create!  I often do my best scrapbooking in the wee hours of the night. 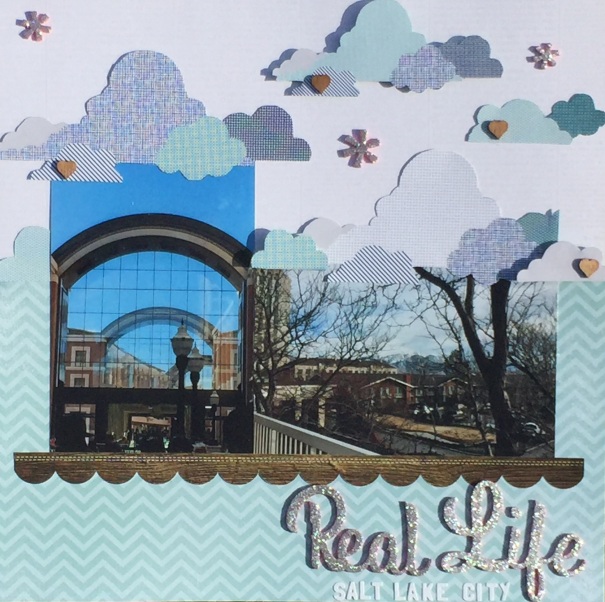 It isn’t a fancy page with a lot of embellishment.  The clouds themselves seem to be enough decoration.  Some are popped up to give a bit of dimension.  I sprinkled them with my favorite wood veneer hearts.  Originally the photos were floating a bit, so I made a shelf for them with the wood grain scallop sticker.  The wood grain was chosen to work with the hearts.

The page still isn’t perfect.  I can see two things in the photo that bother me.  First, I’m not sure about the silver foam Thickers.  I am not going to change them out for something else.  They were the right size for this layout, and I can live with it.  I’m also considering adding a cloud at the top right of the vertical photo.  That white corner formed by the photo and the bottom of the cloud just doesn’t look right.  (Of course I didn’t see that until I photographed the page.)

Still, I am rather happy to have changed it up a little.  On to the next project!

4 thoughts on “Cloudy With a Chance of Creativity”