The downside is that I sincerely struggle with the spaces that don’t have photos!  I am not sure why anything smaller than a 12 x 12 page just completely flummoxes me.  I have the same challenge with card making.  As soon as you shrink down the working space, it’s like I have no scrapping instincts at all.  For this page, I was left with two 6 x 6 sized slots that needed something in them.  I didn’t have any additional photos from my meet and greet with Dug and Russell, so that wasn’t an option.  *Sigh* 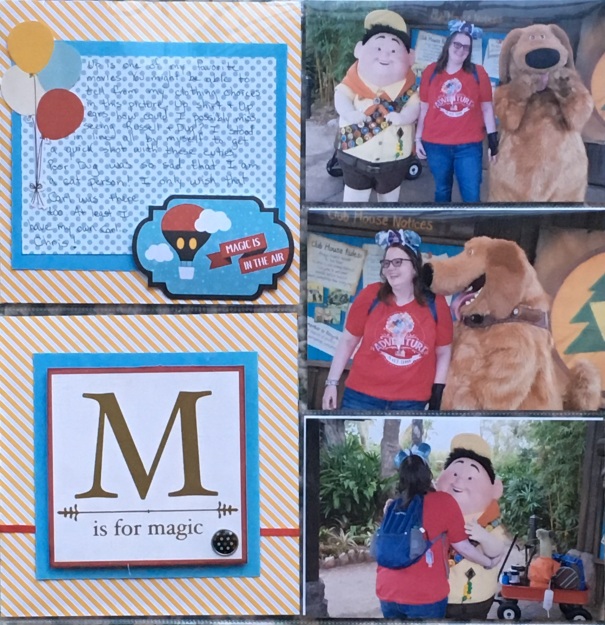 For this page, I decided that the best solution to this problem was a title square and a journaling square.  I know… it isn’t the most creative solution, but I was at a loss.

I started with the title.  I decided to use a cut-apart instead of individual letters.  Using alphabet letters would have left too much empty space.  To be completely honest, I am also forcing myself to use as many of the cut-aparts as I can.  Usually they sit in my stash for eons, just waiting for me to figure out a way to use them.  I liked that I could make a clean stacked square format using the “M is for magic” piece along with some blue cardstock.  To add dimension I raised up the title onto pop dots.  I also included a piece of red ribbon and a flat backed brad.

The journal block is a rectangle rather than a square.  Part of me thinks it would have looked better had both blocks been stacked squares.  However, I wanted more room to write.  I knew that the two die-cuts were going to eat up some of the writing space.  Function won out on this layout.  Still, the lack of balance is going to bug me until the end of time.  If I can’t let it go, I may actually redo that block.  Though I won’t ever pull a page apart and start over, I could see redoing a block.  Maybe that’s the beauty of the divided page protectors?  Otherwise they just can’t compete with my beloved 12×12 layouts.

Today’s Disney tip is about character meets.  The Russell and Dug meet and greet is in Animal Kingdom at Discovery Island.  As I was walking up, the characters were leaving.  If this happens to you, go ahead and get in line!  It only took about 5 minutes for the characters to return.  They take a break about every 30 minutes, so don’t despair!

I seriously love Disney movies.  Shocking, I know.  The first 5-10 minutes of Up is amazing.  I will neither confirm nor deny that I cry every single time I see it.  When I heard that Disney was bringing Kevin to Animal Kingdom right before our trip, I was thrilled.

I knew that she was a wandering character, so I was really hoping that we would cross her path.  Luck was truly on our side this trip.  We encountered Kevin several times during our visits.  The nice thing about Kevin is that she is hard to miss.  She is so tall!  She doesn’t stop for photo ops, so you aren’t likely to get that perfect picture with her.  You can see that my pictures were crowd shots. 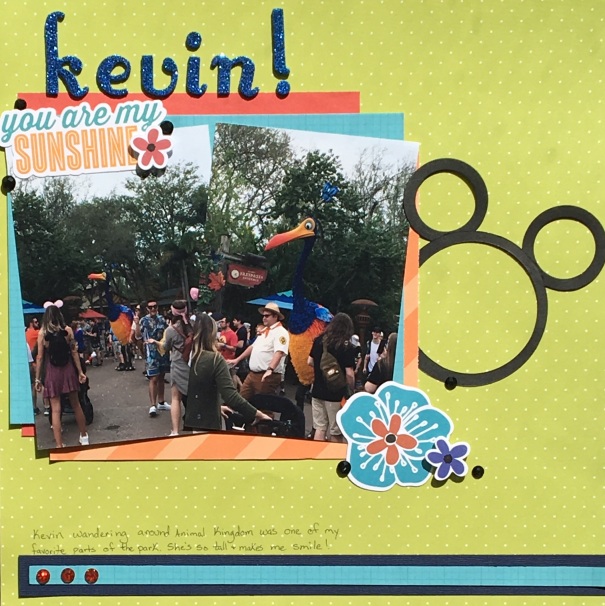 Since Kevin is such a colorful creature, I knew I wanted an eye-catching page to match.  I pulled orange, teal, and red scraps to place behind the photo.  Originally, I was using a white cardstock background.  Somehow that just looked too stark.  So, a little rummaging led me to this very bright green background.  It does such a nice job of setting off the photos.  I knew I wanted to add a bit of blue as well, so I also included that navy strip along with another piece of the turquoise paper.

This was a pretty easy layout to put together.  I was either copying a page I had picked up off of Pinterest, or looking at a sketch.  (I created this page about a month ago.)  Normally I would link the original here, but I can’t find that Pin anywhere!  The only real challenge was figuring out how to make the Mickey head.  It finally dawned on me that I just needed to use my big circle cutter.  The trick is to make sure you cut out the inside of the circle first and then the outside.  (Yeah, I may have learned that a couple of years ago when I clearly wasn’t thinking about what I was doing.)

The rest of the embellishments just came from a die-cut pack and some gems.  I was actually pretty happy with finding a good use for those flower die-cuts.  They sat in my collection for quite some time because I don’t think I’ve ever used a compatible color scheme.  The one change that I am going to make is the placement of the black gem on the Mickey head.  Now that I am looking at it on screen, it appears that Mickey has developed an unusual growth that needs to be checked.  I will move it a bit lower so that it is floating and not touching poor Mickey.

I love this layout.  It’s colorful and quirky just like Kevin.  It also was a nice way to use up some scraps.  That always makes me happy.

Disney tip:  Make sure to do your homework before leaving for Disney.  I knew Kevin would be roaming around the park, and made sure to keep an eye out for him in certain areas of Animal Kingdom.  My research helped me get pictures with the living statues at Epcot during the Festival of the Arts.  We also got to see Gideon and Prince John in Magic Kingdom.  Without reading ahead of time, I may have completely missed these characters as they aren’t regulars with an assigned spot.